I was chastised today.  One grandma, who will remain nameless, expressed her feelings of being tired of checking our blog and seeing the same thing for 3 weeks straight.  So I thought I’d better get something new up on the blog to stay in her good graces.

What have we been doing?  Although I’d like to say I have been taking it easy, putting my feet up and relaxing, we have had a lot going on.  For 2 of those 3 weeks, 3 out of 8 of us had strep (including me) and 5 out of 8 had a bout of the stomach flu (including me).  In the middle of that, I promised Brooklyn a “friend” party this year and had to keep up my end of the bargain.  We also decorated for Christmas, I’ve been working on a big project for church, and I’m not only getting ready to move by organizing, purging and compartmentalizing, but I’ve been a little obsessed with how I’m going to decorate almost double the square footage we have now on a fairly small budget.  Oh, and we got family pictures, I’m putting together Christmas cards and trying to make this holiday season merry and bright with the bazillion (not sure that’s a real word) other holiday things to do besides the regular motherly daily duties (like the 10 loads of laundry which was washed, folded and put away yesterday)…  So, now that I know my kids have clean socks and underwear for at least the next 7 days, I guess I can spend the next few days catching up on the blog.

Brooklyn is ten years old.  Justin couldn’t believe it.  I’ve already experienced the trauma of my firstborn hitting double digits and almost hitting my mid-thirties, but he is just getting started.  (I’m older and wiser than him for those of you out there that aren’t aware of that fact).  Although the kids want friend parties every year, it’s a little expensive and crazy to do that with 6 kids.  After much deliberation, we finally agreed to let the kids have a “friend” party on the even years, starting at age 8, since those are the majority of the “milestone” birthdays and a family party on the odd years.  Everyone is happy with this compromise.

Brooklyn wanted a swimming party…in the middle of November.  It ended up being a hit with the kids, our whole family could go and not necessarily be a part of the “girl” party, it kept the mess and entertaining at the pool  and the kids were happy with an ice cream cone on the way home. 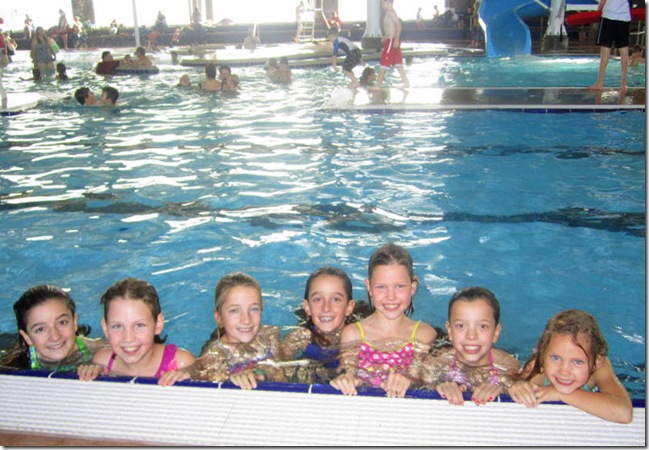 Brooklyn and some of her best friends enjoying her swim party.

A is for Apple

Colton likes apples.  I ordered some really expensive “organic” apples from Winder Dairy and put them in the fruit bowl on the counter.  When I looked at them more closely one day, there was a little bite taken out of each one.   Nice.  Yesterday, Justin was talking to someone on the front porch.  When he came back in, Colton had one in each hand and was switching off taking bites out of them.  I’ve moved them into the fridge before, but I just don’t like cold apples.  They hurt my teeth.  I’ve moved the fruit on top of the fridge, but then we forget about it.  I put our garden fresh yummy home-grown tomatoes in the fruit bowl this summer and apparently apples and tomatoes look a lot alike to Colton.  He took a bite out of a few, but soon discovered it wasn’t the delicious crunch he was seeking and spit it out all over the floor.  As you can see he likes apples so much that he eats the entire thing.  The only evidence that’s left is the stem. 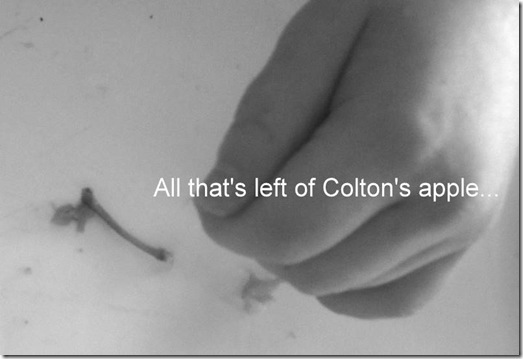 Progress on Our Casa

For family and friends out of state or those who live nearby but haven’t gotten a chance to see the progress of our house, here it is today.  There were 13 vehicles of various genres of workers working today.  I think they are trying to get as much as they can done on the exterior before it snows tomorrow, that’s right for those of you living in warmer regions of the country, SNOW! 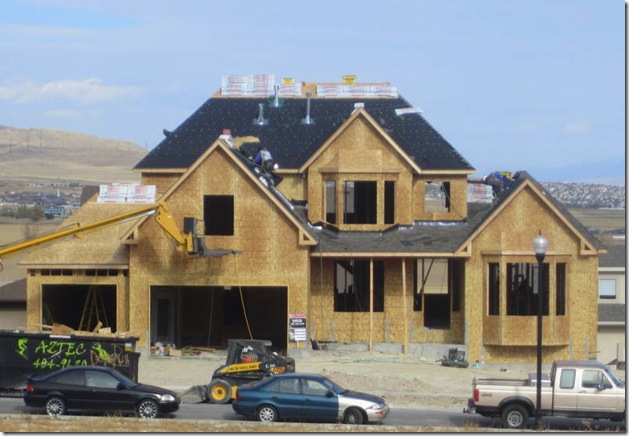 I’m sure it will look better without the dumpster and work vehicles in front of it, but it is taking shape.  Framing is nearly done and the HVAC, plumbing, roof and electrical are being done as I type this!  We don’t have a move in date, but we are happy to see constant progress!

It is my least favorite holiday.  I would rather celebrate Arbor Day, Veterans Day, or even Bosses Day over Halloween.  I guess I am the scrooge of Halloween if there is such a thing.  This year, Justin and I played it smart.  Some people said we were “cheaters”.  Others called us “lazy”.  But they didn’t have Colton to keep track of or push around in a stroller he’s too big for.  So we came up with “Truck or Treating”.  Yep.  We drove around in the truck and followed the kids around the neighborhood.  Colton was content with me feeding him Smarties, Justin was content not chasing Colton.  I was content because everyone else was content.  The kids thought we were awesome parents because we cut down on their candy gathering leg-work.  When they finished going up and down a street, we hauled them to their next trick-or-treating destination within the neighborhood.  I think we just found a new Halloween tradition. 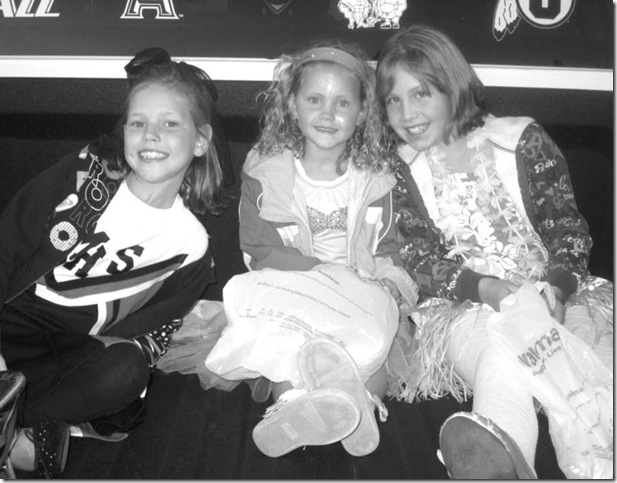 Brit the cheerleader, Matti the Mermaid and Brooklyn the Hawaiian girl in the back of the truck ready for trick-or-treating,

Let me tell you a bit about this “little man”.  Colton has definitely kept us on our toes, as I’m sure you’ve seen in past posts.  He is certainly an enigma.  We are constantly trying to figure out what’s going on with this kid, and I don’t know if we are getting any closer to an answer.  We thought he was deaf because he didn’t have eye contact and played in his own little world, but got his hearing checked and it was fine.  He constantly had ear infections, so we got him tubes.  He couldn’t stick out his tongue, so we thought a tongue tie was the only thing holding him back from talking.  2 ENT’s said it wasn’t bad enough to clip, the 3rd one agreed to do surgery and once in there found his muscle pulled so tight that it was one of the worst tongue-ties he had seen.  He still wasn’t talking and was severely developmentally delayed.  Early intervention which included speech, occupational therapists and horseback riding therapy, helped us teach him how to chew, drink from a cup, eat with a fork and spoon, and teach him to follow one-step directions.   He had the most foul diapers I have ever seen.  I talked Justin into getting Colton’s blood tested, and we discovered he had Celiac’s disease (gluten allergy).  So we put him on a gluten-free diet.  We got him tested for Special Education, and he tested in the 1st percentile in all 5 areas of testing.  He went to 2 specialists at the University of Utah, and each came out with a separate opinion, which got us no closer to figuring out what was wrong.

We recently took him to a 3rd evaluation to see if we could get an Autism diagnosis.  After 2 observations, multiple tests and a large fee to get this all done, he has currently stumped the doctor/psychologist and we are still awaiting an answer.   We thought he might have had a seizure, so our next step is an MRI and many other tests to see if he has Seizure Disorder.  We don’t understand the spinning, fascination with lights and fans, the repetitive motion or the rocking.   His brain is functioning at a very low IQ which is why he learns at an alarming slow rate.  If he is taught something, his brain can’t access the information he has learned, and nobody knows why.  All we want to do is help him learn, grow, progress and develop normally.  It is beyond frustrating.

I had no idea when I married Justin the obstacles we would be facing with Colton.  It has not been an easy road.  It has caused sadness, contention, frustration and strife.  But one thing is for sure.  This boy is a special spirit.  Even though he has been crying a lot lately (I call it “CNAR”, Crying for No Apparent Reason), he has always had a sweet disposition.  He is never mean.  He is a good traveler in the car.  He is loving, and he loves to give hugs when you ask him to do something, and he doesn’t want to do it (he especially does that to his teacher at school).  The kids love him and life would be boring and dull without him.  I guess 5 other kids weren’t enough to teach the 2 most impatient people in the world (Justin and me) patience.  We love you, Colton.  Happy 4th Birthday! 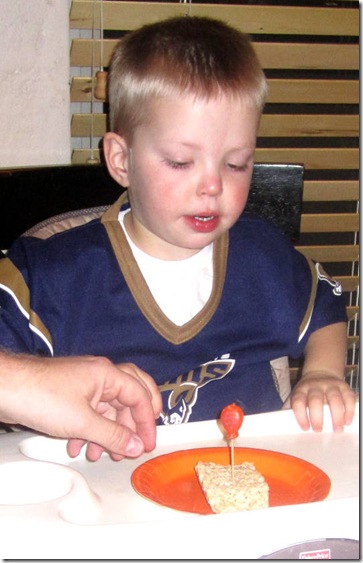