When there’s no internet, cell or texting service, you’re not always in the loop of what’s going on at home, which can be a good thing.  Early Sunday morning when our boat docked in Galveston, Justin checked his Facebook first thing (of course) and found a message posted from his mom that she had been in a car accident with the boys…in our car.  As she was driving down the road, minding her own business, a car turned in front of her while she was traveling about 45 mph.  4 lanes of traffic were shut down.  The other car was totally at fault.  No one, including the other driver was seriously hurt, thank goodness!   The Denali has about $10,000 worth of damage, maybe more once the frame is checked and the other car was totaled. 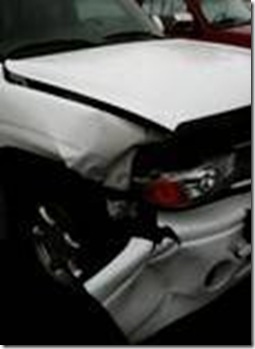 Funny thing was that our neighbor and friend was the policeman who responded first.  Justin’s dad was 2 cars behind.  My mom was picking up the kids from school and Cam saw the accident.  He said, “Grandma, that looks like our car, and the little boy inside looks like Colton!”  My mom reassured Cam that our car was parked safely in the garage locked up and that there were lots of little boys that look like Colton…haha.  She was wrong.

Pic from the tow yard taken by Justin’s iphone

Definitely NOT what you want to come home to, but "IT COULD ALWAYS BE WORSE"...hehe...do you ever get sick of hearing that. :)