“Sometimes the most special souls are housed in the most fragile frames” Elder Ronald Rasband of the Seventy of the Church of Jesus Christ of Latter Day Saints said during General Conference today.  Colton is not “fragile”,  by all means.  Grandma Carmen is sure he has magnets on the bottom of his feet, because when you go to pick him up, he just sticks to the ground because he is so heavy.  He is definitely a “special soul”.

We still don’t know what is causing his severe developmental delay.  He still doesn’t talk or attempt to communicate.  His next step is an MRI.  Hopefully we will get some answers.  After administering a multitude of tests, the last (4th) doctor we saw said he just “can’t learn”.  If he does learn something, it gets stuck in his brain and he can’t access that information again.  He doesn’t process something as simple as the sign for “more” or “eat”, even though he has used those signs correctly in the past and we have used them at every meal for the last 2 years.   In the meantime, we have gotten him more one-on-one help in hopes that he will progress at a faster rate.  Justin and I are definitely “fixers”.  We want to know what’s wrong so we can just fix it.

Here are just a few snapshots that I actually captured Colton smiling at the park. 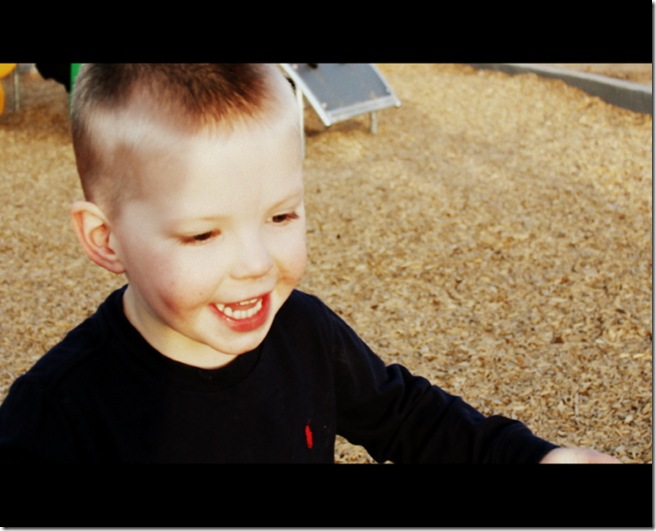 He has learned to like the slide since last summer.  What a good workout! 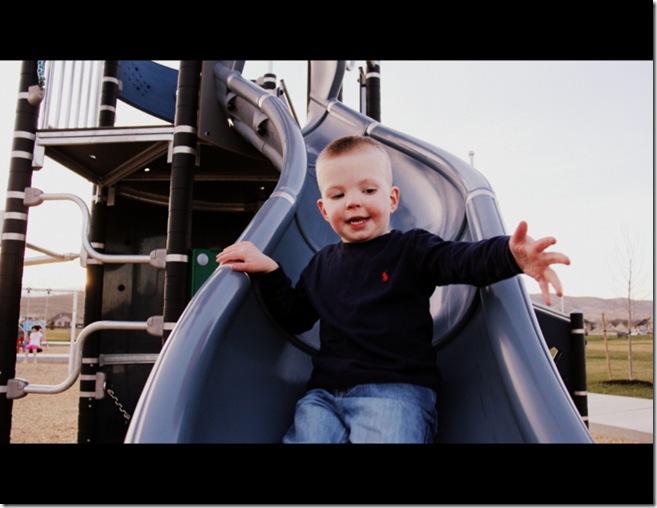 Bouncing up and down on this piece of equipment brought a smile for a split second. 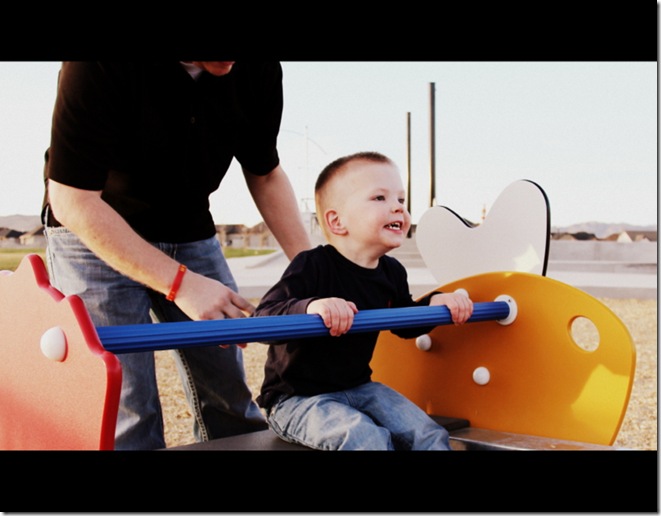 Swinging has always put him in a trance.  I can usually get his attention by grabbing his toes. 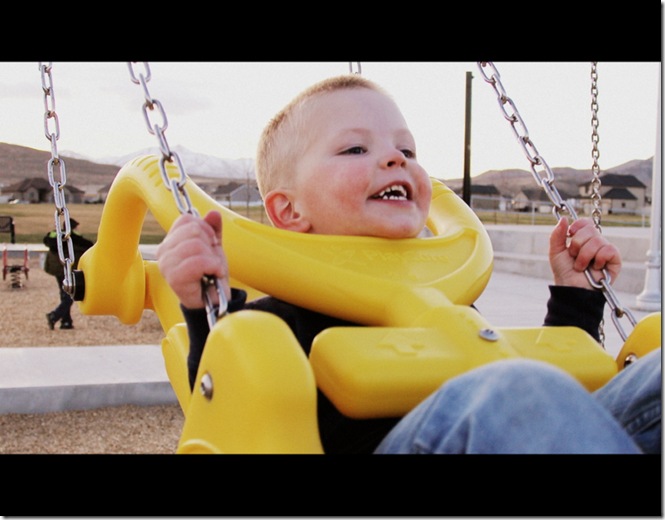 Colton is the master of spinning.  He can put a spin on just about anything he finds, or will at least try.  This was the attraction of the day.  He would spin it, leave and come back when it slowed down and repeated this over and over. 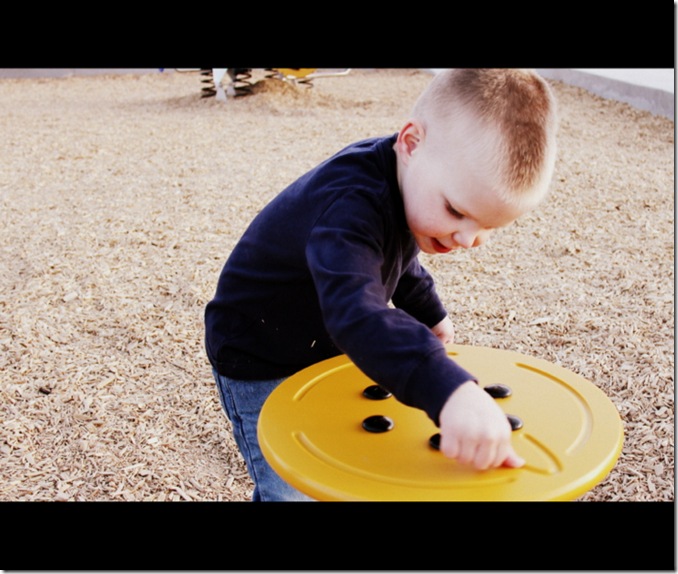 Boy, he is flexible!  I don’t think I can stretch my hamstrings like that! 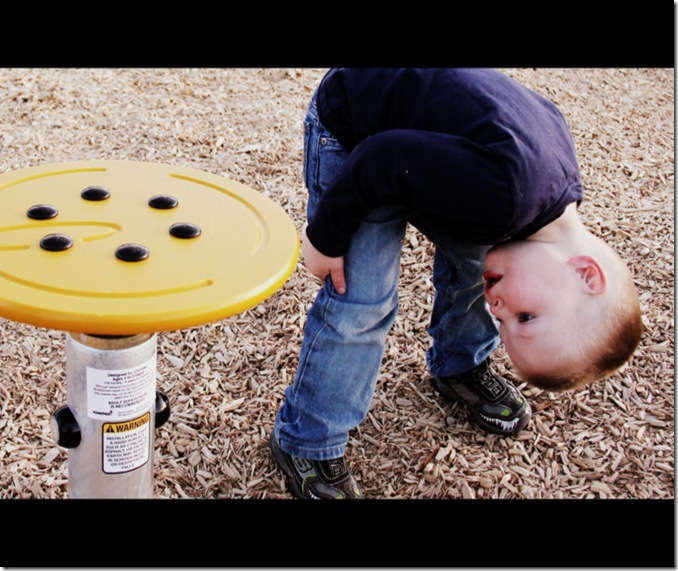 When I took him to the doctor, he was entertained with spinning the doctor’s chair like this for 45 minutes straight while we were waiting. 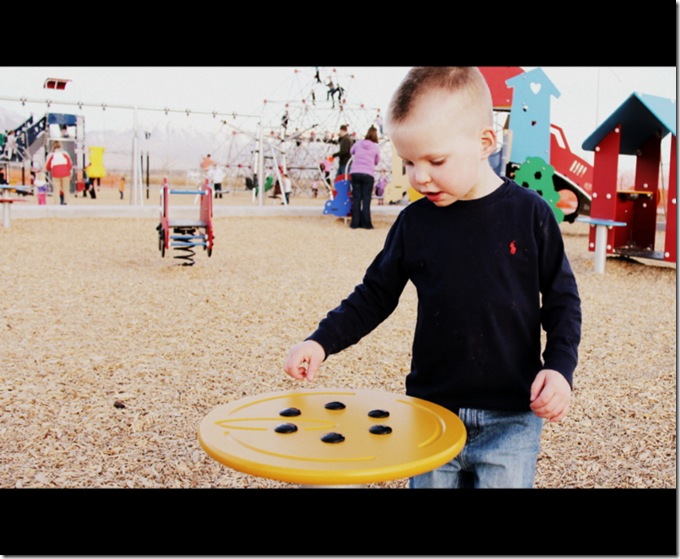 There’s nothing we want more than the best for this little boy.  One day we hope he will be able to communicate and catch up.  We love him so much!

It's fun to see him smile! He has such a cute one.

He's a cutey!!! I was jut wondering if the doctors have tested him for autism. My son is 4 and does the spinning and a lot of other atistic tendencies and I just had him tested for autism. I understand how heart breaking and frustrating somedays can be. I hope they discover what's happening quickily so, you and Colton can get the resources and help you all need.